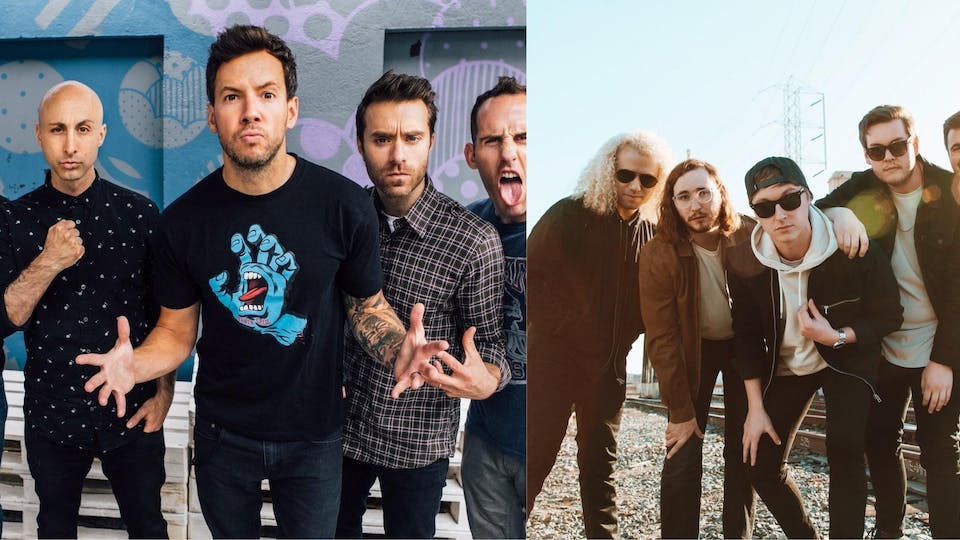 We The Kings, Northbound

$1 of every ticket sold on this tour will go to the Simple Plan Foundation. Together with State Champs, the band has decided that all the money raised on this tour will be donated to help children affected by the ICE immigration raids in the USA.

They have played at some of the music industry's most prestigious events like the 2010 Winter Olympics closing ceremony, the 2004 Live 8 benefit concert, the MTV Music Awards as well as multiple TV appearances on shows like The Tonight Show, Jimmy Kimmel Live!, the 2008 NHL All-Star Game and 2015 NHL Winter Classic game where they sang the Canadian National Anthem and the Macy's Day Thanksgiving Parade, among others. Last year the band performed throughout the USA as one of the headliners for the final Warped Tour and were featured at the two monumental Warped finale events in Cleveland and San Francisco this summer.

Through their Simple Plan Foundation, the band has donated more than $2.5M to youth-focused charities since December 2005, helping both young people in need and children facing life-threatening illnesses as well as promoting musical education programs in Canada and abroad. The band continues their philanthropic initiatives and $1 of every ticket sold on this tour will go to the Simple Plan Foundation and, with their friends in State Chanps, have decided to earmark the donation specifically to help children affected by the ICE raids in USA.

Over the past decade, Albany, New York’s State Champs have become a major player in the world of pop-punk, helping define the shape of the genre for a new generation of fans. And on June 10, Living Proof will push pop-punk forward.

Formed in 2010 by vocalist Derek DiScanio and guitarist Tyler Szalkowski, the pair began laying the foundation of State Champs in garages and basements throughout their hometown. The band’s lineup would shift a bit, but DiScanio and Szalkowski were always at the helm, crafting the band’s 2013 debut, The Finer Things, along with guitarist Tony "Rival" Diaz and drummer Evan Ambrosio. They’d add bassist Ryan Scott Graham the following year and, in 2015, they’d release Around The World And Back, a record that elevated State Champs to a frontrunner in the genre.

The band’s third album, Living Proof, will be released June 15 on Pure Noise Records, and it’s the most ambitious and cohesive work in the band’s catalog. “It was like, let’s take as many swings at it, try as many new things and experiment, until we get to the point where we could start searching through it all and then find the album,” says DiScanio of the writing process. After touring for Around The World And Back wrapped, the band returned to Albany, headed back into the garage, and started writing songs for what would become the framework for Living Proof. Getting back to their roots paid dividends, as the band had a new batch of songs ready, and once they linked up with the album’s producers, they wrote even more.

Living Proof was recorded in two different sessions with different teams assisting the band. The first session saw John Feldmann producing, who brought his knack for writing hit records—which he’s done for bands like Blink-182 and Good Charlotte—into the fold. But State Champs wouldn’t let their old-school roots die, teaming up with Mike Green and Kyle Black, the pair that shepherded Around The World And Back across the finish line. “If there was only one chance we had at beating the sound of Around The World And Back, we still had to have them involved,” saud DiScanio. With the recording process split in two, it allowed State Champs to write and record more songs than ever before, culling it down to the most potent batch possible. “At the end of the writing and recording process, we had 19 or 20 songs. We looked at each other like, ‘Holy shit. What the hell? This has never happened before,’” he said. .

Not only that, State Champs collaborated with some of pop-punk’s heaviest hitters, as the band co-wrote songs with Alex Gaskarth of All Time Low and Mark Hoppus from Blink-182. Though State Champs had no intention of working with Hoppus, the punk legend stopped by Feldmann’s studio while the band was recording and quickly took a liking to them Before long, Hoppus was helping the band write a pair of songs, working with DiScanio on the lyrics, and then jumping in the vocal booth to lay down some parts of his own. “We had no idea he was even coming in,” said DiScanio, “Then the next day, me and Mark Hoppus are just sitting out by John Feldmann’s pool writing lyrics from scratch. And that ultimately ended up being ‘Dead And Gone,’ which is the first singe on the record.”

We the Kings are a melodic emo pop band from Bradenton, Florida, a small Southern town that doubles as the home base for Tropicana orange juice. Friends since childhood (the band's moniker even refers to the name of their junior high school mascot), the four bandmates -- singer/guitarist Travis Clark, guitarist Hunter Thomsen, his brother, bassist Drew Thomsen, and drummer Danny Duncan -- formed the group while attending high school. Under the guidance of manager Bret Disend, they placed a number of tracks on the social networking site Purevolume in 2007 to build online buzz. Meanwhile, they also pursued a deal with EMI's imprint S-Curve Records, which eventually signed the group.

Smile KidWe the Kings' self-titled debut album was produced by Sam Hollander and mixed by Lou Giordano, both of whom had done work with some of emo pop's most marketable acts, and released in October 2007. "Check Yes Juliet" cracked the Pop 100 that fall, and the group spent much of the following two years on the road, playing shows alongside simpatico bands like the Academy Is... and Hey Monday. They also found time to record a second album, Smile Kid, which arrived in late 2009. Like the band's debut, Smile Kid spawned a Top 100 single with "We'll Be a Dream," which featured guest vocals from Demi Lovato.

We the Kings continued to tour heavily, supporting All Time Low for several months before headlining their own shows at home and abroad. The shows stretched into 2011, by which point the group had already begun work on a third album. Sunshine State of Mind was released that summer. The album marked a shift for the band, as they started to incorporate pop and hip-hop influences into their sound. It was We the Kings' last album with Drew Thomsen, who was replaced by Charles Trippy on bass. Another new member, Coley O'Toole, joined the band on keyboards and rhythm guitar for the recording of the group's fourth album, Somewhere Somehow. An acoustic hits album, Stripped, followed in 2014.

Six The band's evolving sound was fully realized on 2015's Strange Love. It featured radio-friendly hip-hop elements and even some disco dance flair on "Love Again," which brought the band away from an All-American Rejects style and into OneRepublic and Great Big World territory. A year later, the band released a hit cover version of the Lin-Manuel Miranda-penned "The Story of Tonight" from the popular musical Hamilton. In 2018, they returned with their aptly titled sixth studio album Six. Included was the single "On My Love." Also that year, they spent the summer performing on the final Vans Warped Tour.