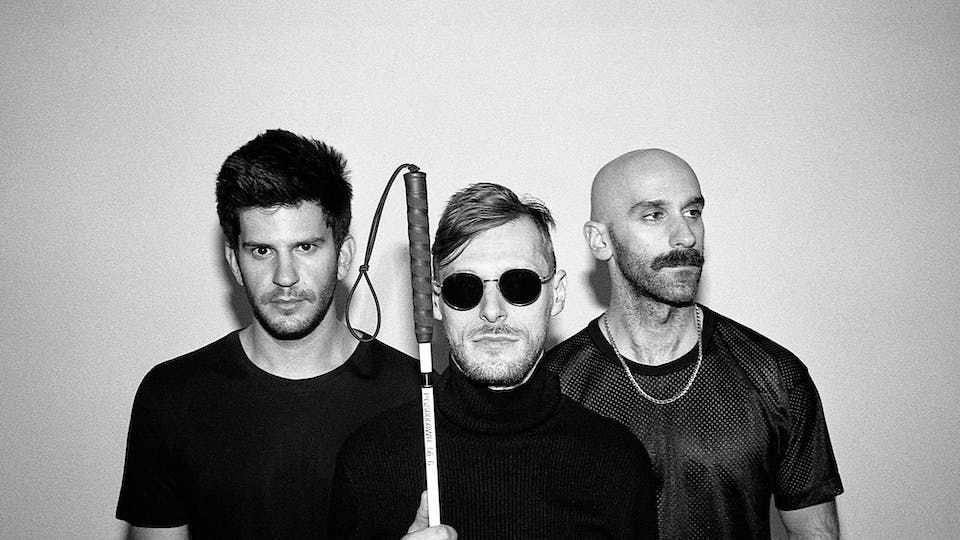 KIDinaKORNER/Interscope band X Ambassadors' debut album, "VHS," reflected on the events that shaped the lives of lead vocalist and lyricist Sam Harris and his older brother, keyboardist Casey Harris, growing up in Ithaca, New York. The gold-certified album, which Rolling Stone called "bombastic rock that's as stomping as it is diaristic, leavened by big-tent pop hooks and a hint of hip-hop swagger," debuted at No. 7 on Billboard's Top 200 chart and spawned the platinum-selling "Renegades," which spent 12 consecutive weeks at No. 1 on the Alternative chart, and the double-platinum "Unsteady." The success of "VHS" sent X Ambassadors on a nearly two-year touring odyssey that found them winning over fans around the world and performing at the Lollapalooza, Bonnaroo, Life Is Beautiful and Shaky Knees festivals, among others, and establishing themselves as a world-class rock band. X Ambassadors released the impassioned "Ahead of Myself" last fall followed by "Joyful" and "Don't Stay" in early 2018 before embarking ontheir JOYFUL headline tour.The band returned to Ithaca for the second annualCayugaSound Festival this past September. X Ambassadors is currently working on their sophomore album. For more information visitwww.xambassadors.com

Bear Hands’ new song, “Back Seat Driver (Spirit Guide)” finds the band and its lead singer, Dylan Rau, stretching out, maturing, and exploring new sonic territory. The track is dynamic and propulsive, butalso reflective and measured, cautious of the impulse to move forward, driven only by momentum. “The song is about free will and finding yourself doing things that you don't feel you are in control of,” says Rau, “being drawn to something and not really knowing why.”Musically, the song is inspired by influences as disparate as M83 and The Who. “I really love the arpeggiated synth work of Pete Townsend,” Rau admits. While writing and recording “Back Seat Driver (Spirit Guide)” Chris Chu of POP ETC, an accomplished songwriter and producer in his own right, served as a spirit guide of sorts. “Chris Chu produced the track and he wrote some instrumentals on it. He wrote guitar parts and helped with the arrangements. Really editing and providing outsider perspective. That really helps.”Founded in NYC, Bear Hands quickly made a name for themselves and paid their dues by playing the boroughs many bars and sweaty DIY venues as well as touring with acts including Foals, Cage The Elephant, and GZA. The band, which includes Rau (vocals guitar, keyboards), Val Loper (bass), and TJ Orscher (drums), are currently working on their fourth full-length release which they plan to release in 2018.

It’s been nearly two years since Kelsey Byrne released her debut albumSomewhereInBetween, and things have changed for her.“I feel like I’m a completely different person existing differently in the world since I made and released LP1,” says the 28-year-old singer who goes by Vérité. Following the release of her 2017 LPSomewhereInBetween, Vérité has become the definition of thriving in the new music industry as an independent artist. Since her project began, Vérité has garnered 250M+ streams across all platforms with 1.4+ monthly listeners. Her debut album has over 50M streams, while her cover of The 1975’s “Somebody Else” has been streamed 111M times.For her next chapter, she took everything she learned crafting her debut and expanded her palette and range. Although she’s been bi-coastal, splitting time between New York and Los Angeles, Vérité was drawn to Nashville where she found herself inspired by new collaborators. The musician dug deep and unboxed her writing process.“Gone,” Vérité’s first single in two years, was the fruition of her first trip to Nashville. Co-written and produced by singer-songwriter Madi Diaz and Konrad Snyder, the song reintroduces the musician, capturing the devastating effects of something ending. Carried by haunting crescendos and Vérité’s powerhouse vocals, the track sees the singer pleading for time to stand still for a little while longer before her world turns upside down. “So leave the clothes and mess we made up all on the floor/Cause when we put them on we’re not in love anymore,” she belts.On a personal level, Vérité recalls various relationships ending, but she believes the sentiment can really apply to any situation that’s final. “You’re sitting in bed with someone and everything is a mess around you, all your clothes are on the floor, everything is fucked up and you know the second you get up and put your clothes on, it’s over,” she explains. With “Gone,” Vérité wanted to capture that in a wave of emotion. “Every time that’s happened to me –and I’ve had it happen many times in my life –it feels so big and transformative but at the same time, when you look back, it’s such a small blip on the radar,” she says of the lyrics.“Gone” speaks to a larger theme she’ll be focusing on with her sophomore album: capturing the nuance of being in a relationship that isn’t romanticized or idealized. So, it’s fitting that this single is the first taste of a forthcoming album Vérité has coming down the pipeline. And fans will find it’s different than her first. For one, Somewhere In Between captured the singer at a time when she was battling numbness and depression; the process of making it was isolating.This time around, she’s found collaborators that feel like family, and her follow-up focuses on how to navigate love and the human experience, while pushing herself emotionally, lyrically and musically and visually into a place she didn’t necessarily approach on her debut. She also came to the realization when she began making this album that her independent project was sustainable. There was a sense of freedom that came with this process where Vérité could write without pressure, experiment and take a step back from the hustle and grind for a moment. Space and time really allowed her to push herself because she had it for the first time.Now, Vérité’s chasing a bigger feeling, and she’s not settling anytime soon.