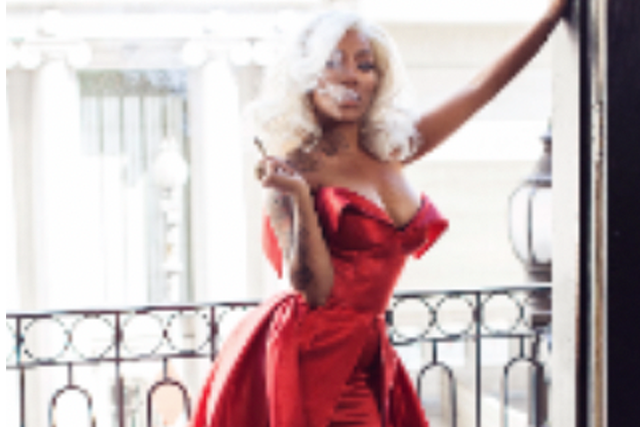 K. Michelle
K. Michelle only briefly touched Billboard's Hot R&B/Hip-Hop Songs chart in 2009 with "Fakin' It," but the single nonetheless signaled the arrival of a proficient soul-rooted R&B vocalist further distinguished by frank and witty songwriting. Later boosted by a role on the reality television series Love & Hip Hop: Atlanta, K. Michelle signed to  and recorded four albums for the label, hitting the Top Ten of the Billboard 200 with Rebellious Soul (2013), Anybody Wanna Buy a Heart? (2014), and More Issues Than Vogue (2016). She has since established herself outside the major-label system with the characteristically uncompromised All Monsters Are Human (2020).

Born Kimberly Michelle Pate in Memphis, K. Michelle learned to play multiple instruments and took vocal lessons, and after graduating from Florida A&M opted to pursue music. Signed to  in 2008, she released "Self Made" and the  collaboration "Fakin' It" soon thereafter. The latter became Michelle's first single to chart, entering R&B/Hip-Hop Songs at number 100. During 2010, "Fallin'" and "I Just Can't Do This" fared better from a commercial standpoint, and Michelle was also featured on tracks by , , and . By 2012, she had signed to appear on the VH1 reality show Love & Hip Hop: Atlanta, and inked a new contract with . Her debut album, Rebellious Soul, was released in August 2013 and debuted at number two on the Billboard 200. "V.S.O.P" went Top Ten R&B/hip-hop, "Raise a Man" threatened to eclipse it, and the singer won a Soul Train award for Best New Artist. Michelle's exposure increased with a headlining tour, a stint opening for , and a Rebellious Soul musical, directed by  and aired on VH1.

Michelle then starred in another VH1 series, K. Michelle: My Life. Its first episode premiered a few weeks before the release of Anybody Wanna Buy a Heart?, her second Top Ten album of blunt yet imaginative storytelling. In March 2016, while K. Michelle: My Life was in its second season, she released her third album, More Issues Than Vogue. Another Top Ten hit and third consecutive R&B/hip-hop topper, its biggest single, "Not a Little Bit," was written with , making a connection with another formative influence. As My Life wrapped up in early 2017, Michelle started releasing pre-album singles that led to the December release of the forthright Kimberly: People I Used to Know. The album -- her last one for  -- became her fourth straight Top Ten R&B/hip-hop LP. A deal with  yielded a few singles during 2018 and 2019, including "Supahood," a collaboration with  and , and "The Rain," a -produced track referencing 's "Can You Stand the Rain." All along, Michelle maintained her small-screen presence, including a portrayal of  on American Soul, a BET series based on the life of Soul Train creator Don Cornelius. All Monsters Are Human, her fifth album, arrived in January 2020. ~ Andy Kellman & John Bush, Rovi